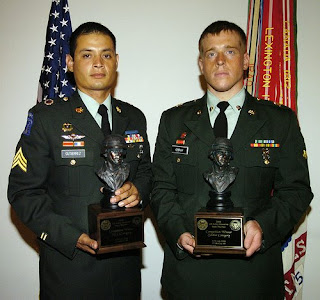 FORT McCOY, Wis. – After four days and four nights of very little sleep, buckets of sweat pouring from their bodies, limbs aching with exhaustion and their feet bloodied and blistered, a field of 32 Army Reserve Noncommissioned Officers and Soldiers was narrowed down to just two.

In the end, Sgt. Francisco M. Gutierrez and Spc. David R. Obray were truly the best of the best at the U.S. Army Reserve Command NCO and Soldier of the Year “Best Warrior” Competition held at Fort McCoy, Wis., July 6-10, 2008.

“I couldn’t believe it,” Gutierrez said after he was announced as the top NCO. “I put myself (mentally) 30 points behind who I thought was leading. But when he was put out in the second round of Mystery Event (combatives), I thought I might have a chance. I still can’t believe it.”

A Unit Supply Specialist with the 98th Expeditionary Signal Battalion, 335th Theater Support Command, Gutierrez has served in the Army for 11 years.

For Spc. Obray, winning the “Best Warrior” competition is one more chapter in a short but colorful Army career.

Weighing over 300 pounds as a 16-year-old, Obray was inspired by his older brother, Christopher, a Sgt. in the Army Reserve. Looking at the younger Obray, you would never know the young man was turned down by the Military Entrance Processing Station twice because of his weight.

Now, much trimmer and fitter, Obray overcame many obstacles to achieve the title of Army Reserve Soldier of the Year.

“After I won the combatives tournament, I knew it was worth 100 points which definitely helped,” said Obray, a construction equipment repairer with the 492nd Engineer Company, 88th Regional Readiness Command.

Throughout the week, the competitors endured a number of mental and physical challenges.

The competition started with a written exam, a graded essay, an appearance before a Command Sergeants Major board on Monday. Tuesday through Thursday was the more physically challenging events that included: an Army Physical Fitness Test, a day and night Urban Warfighting Orienteering Course, completing ten Warrior Tasks and Battle Drills, M-4 rifle day and night qualification, a 10km ruck march and the Mystery Event which comprised of a last-man-standing combatives tournament.

Over the last three days, the competitors covered nearly 20 miles on their feet, carrying 35 pound rucksacks, full body armor, weapons and assorted military accoutrements. Due to the loads and the Wisconsin heat, many competitors kept the combat medics busy bandaging feet and administering intravenous fluids.

“This competition is tough,” Sgt. Maj. Anthony Young, USARC “Best Warrior” NCOIC, told the competitors on Sunday evening before the competition started. “It’s designed to be as close to the Department of the Army competition as possible.”

The next step for both Gutierrez and Obray is to prepare for the Department of the Army NCO and Soldier of the Year “Best Warrior” Competition which will be held at Fort Lee, Va., Sept. 28 – 3 Oct., 2008. There, they will represent the Army Reserve against the 11 other major Army Commands.

“I plan to train twice as hard as I did for this competition,” Gutierrez said. Both he and Obray said the Fort McCoy competition was “intense and challenging” and they expect to Army-wide competition to be the same if not more challenging.